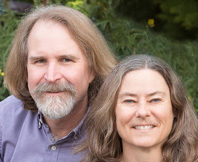 David R. Montgomery is a professor of Earth and space sciences at the University of Washington. He studies the evolution of topography and the influence of geomorphological processes on ecological systems and human societies. He received a BS from Stanford University (1984, geology) and a PhD from UC Berkeley (1991, geomorphology). His field studies have included projects in the Philippines, eastern Tibet, South America, California, and the Pacific Northwest of North America. In 2008 Montgomery received a MacArthur Fellowship. His books Dirt: The Erosion of Civilizations, King of Fish: The Thousand-Year Run of Salmon, and The Rocks Don’t Lie: A Geologist Investigates Noah’s Flood have all won the Washington State Book Award in General Nonfiction. Montgomery’s latest book, Growing a Revolution: Bringing Our Soil Back to Life, was a finalist for the PEN/E.O. Wilson award for Literary Science Writing. His books have been translated into nine languages.